How Public Transportation can Socially Include and Exclude

Editor's note: The full text of this article, written by Carolyn Flower, originally appeared on Sustainable Cities Collective and is reprinted with permission.

I feel that effective urban planning involves working to make sure that all social groups are able to access public transportation and move freely place to place . In order to understand the idea of “people’s right to mobility” more deeply, I researched Bogotá, Colombia’s bus rapid transit system, Transmilenio.

I synthesized an array of information on the subject, and I feel that in order for Transmilenio to continue to become a more effective tool for social inclusion, emergent issues such as its linkage with the traditional bus system and its public image need to be addressed. 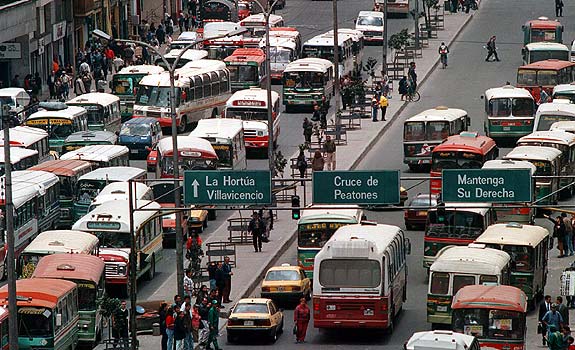 Understanding the possible duality between social inclusion and social exclusion is an important aspect in the discipline of sustainable urban planning.

The “right to mobility” is important to consider because mobility allows people to move place to place and connect with each other on a greater level.

If mobility is not easily accessed, especially if it is only certain groups that are experiencing the difficulty, this can create exclusion and tensions among social groups.

Competent and extensive public transportation is also important because ultimately it is the public that will either cause a planning objective to thrive or deteriorate. I feel that two of the most significant obstacles Transmilenio faces are its public image and relationship with the traditional bus system.

Although there has been talk of a metro and criticism that the system has not been funded, it is important to consider the long-term usefulness of Transmilenio.

Perhaps a metro would be useful for Bogotá, but perhaps if Tranmilenio was already completed there would be less of a focus or need for a metro. It seems that with every delay, Transmilenio's dependability and public image suffers.

Another question that remains is how can the traditional be integrated into Transmilenio most effectively, reducing the competition between the two systems?  The traditional bus system it provides important employment to many people within the city and reaches that Transmilenio cannot reach yet.

I feel that there seems to be many questions that need to be addressed in order for Transmilenio to move forward successfully. However, I do not think the uncertainty that surrounds Transmilenio is necessarily negative.

Transmilenio was a hugely influential planning initiative Bogotá implemented. It makes sense that there would inevitably be many emerging issues that go hand-in-hand when a new project of Transmilenio’s magnitude is initiated.

Questions that I still have about Transmilenio center around two ideas: How can residents become better integrated into the planning process? What will it take for Transmilenio to be completed more quickly?

What can southeast Michigan's RTA planners take away from Bogata's experience implementing their BRT system? Tell us in the comments below.