DETROIT—Students at the University of Michigan had an idea: Enhance the accessibility of biking by installing bike air pump and fix-it stations across campus. They recently won a campus sustainability grant to make this idea a reality sometime in fall 2012.

Bike pump and fix-it stations exist the world over, and have taken a long time to come to our region. In Detroit, where being "bike-friendly" is the adjective du jour, motorists still drive to-and-fro over bike lanes, and southeast Michigan in general is still struggling to keep potholes filled and bike lanes painted.

We've still got a long way to go. 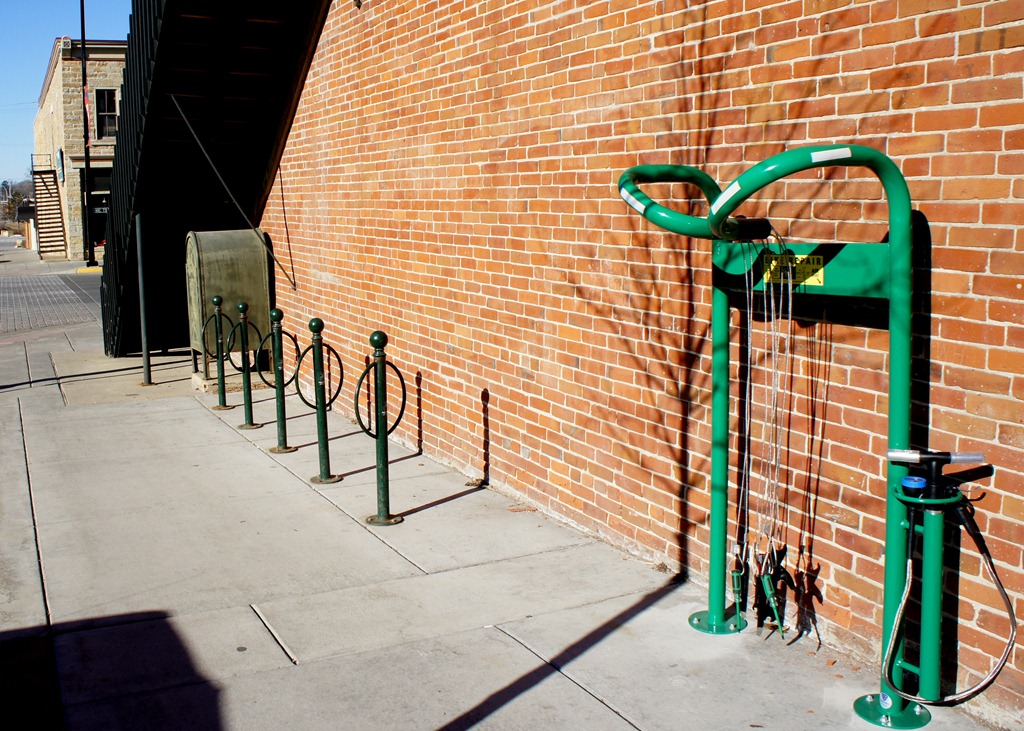 But man, wouldn't it be great if after a rough ride over that gaping pothole at Iron St. and Atwater St. (pictured above), you could drag your wheels over to the nearest stop, fix her up and get back on the road?

U-M's plan is to have two stations, one in Central and one on North Campus, both of which will provide repair tools in addition to pumps. They'll eventually develop bike repair workshops for riders with a local bike shop, too. Having repair stations for people who don't really know how to make bike repairs might prove tricky at first, but we commend them for including it just the same.

Luckily, Detroit's ahead on the training-folks-to-fix-their-bikes front via workshops and training conducted at the Hub of Detroit and Fender Bender Detroit.

As far as public bike pump and repair stations, I can't find one stitch of information on any in Michigan.

But, could it work here?

Detroit is complex and many factors should be considered before embarking on such an ambitions plan. Where these stands should be placed, how safe the areas are at night, folks' ability to understand how to use the tools and make repairs, and the density of the cycling population would all play a role in such a program's success, according to the Hub's retail manager, Darrin Brouhard.

"Bike shops where most riders go to get their bikes fixed are located mostly in the Midtown and Downtown areas in Detroit," he says. "Education is a great thing, and we have an active fix stand in front of the Hub, but aside from the few bike shops in the city (144 square miles of it), and the odd lawnmower shop or hardware store, places to buy tubes and get your bikes fixed are hard to come by. There's definitely more need than there is service."

To be completely self-sustaining for the totally unprepared biker, a bike pump and repair station would need at least the following:

"It's not just geography. It's availability within areas people are riding. [Getting a flat] can happen anywhere at any time, even in the middle of the night; I repeatedly have people at my shop in the morning waiting to get their flats fixed so they can get to work on time," he says. "And I know what it's like to be fixing my flat in the middle of nowhere at night."

As a non-skilled, leisure rider, I would consider this a Godsend if they existed where I lived (Livonia), or in Detroit for that matter (I'm trying to ease into the Detroit riding scene). I have popped my fair share of tubes at gas stations, and I'm usually fumbling with the tube replacement, so the right tools and instructions on-hand would be great for me, but probably not for everyone.

Brouhard says the kind of cyclists who might access this kiosk probably already have these tools on hand, and folks without much money may not be able to afford the cost of a vended tube. But maybe these kiosks would entice others to feel safer out there. Who knows?

A quick survey of other cities with public bike pumps and repair stations shows Stockholm with their cycklepump stations, Cambridge, Mass. with their free bike repair stations, at Fresno State University in California, among many others. None offer tube or tire vending. An innovation worth pursuing or a waste of time? I'd like to think that in a city the size of Detroit, and the scarcity of tubes and tires around, it might be worth it.

Regardless of the feasibility of the vending option, it's quite an exciting idea. I'd personally donate to a kickstarter for this one, any day. Any takers?

If you know of any stations in Michigan, send me an e-mail and we'll add them to our digital mapping project under construction.