Home›Transportation›Smart wheel takes the load off your commute

Smart wheel takes the load off your commute

DETROIT—In our sprawling city, commuting by bicycle may seem daunting to those who do not consider themselves endurance athletes.

We’ve got 139 square miles of land mass and far more when you consider the near-in and well-populated suburbs of Ferndale, Dearborn, the Grosse Pointes, Warren, Allen Park, Southfield and others.

But what if a bike could give riders just a little boost? Enough, say, to make a 15-mile ride feel like a five-mile ride.

Enter a smart wheel being designed by the SENSEable City Lab at MIT that has just that ability, making a 15- to 20-mile ride seem like a five- to seven-mile ride because you’re expending less energy.

That assistance, which makes your trek feel like one-third of its true distance, would likely have more folks consider commuting by bike, even in our mammoth metropolis.

The SENSEable City Lab’s electric bicycle system – coined the Copenhagen Wheel because it was developed for the City of Copenhagen and presented there in 2009 at the Mayor’s Summit at the United Nations Climate Change Conference – may be on its way to market over the next couple years.

According to Assaf Biderman, associate director at the lab, the MIT research is almost mature enough for the smart wheel to figuratively be rolled out into the commercial environment for final development and production – maybe as soon as 2014.

The smart wheel has an electric motor, a battery and a smart phone interface, all of which are located in a single hub that sits on the rear wheel.

The Copenhagen Wheel has experienced many improvements in engineering and design since its initial unveiling three years ago, making it lighter, more energy efficient, and with improved functionality in recapturing energy from both braking and pedaling.

“It’s almost nine pounds in weight, consumes very little energy, is easy to make, with very few parts,” says Biderman. “We’re at the point where it can actually be rolled into a product.”

The initial intent of the bike was, first and foremost, to get more people on bikes: especially people who live in cities that have been designed around cars with geographical challenges like hills (not here) and daunting distances and urban sprawl (definitely here). Places where people are most likely to choose motorized transport and not hop on a bicycle.

“So it was obvious that you need some sort of an assist, that’s why we chose to go with some sort of a motorized bike,” says Biderman, reflecting on the early days of the project.

When the MIT team looked at what was available, electric bikes existed, but were too heavy, too clunky and too expensive.

“And they [electric bicycles] were not capturing people’s attention. We wanted to design something that’s fun, that’s sexy, that won’t be expensive, which once you get on will make hills feel flat, will make distances feel shorter.”

With humble beginnings in a student workshop, an idea was sketched out and technology was designed. From there it was refined, and maybe in a few years it will be manufactured – and Detroit commuters will have another alternative.

Biderman says that cutting the energy expended for a long ride by one-third would break open the barrier for entry for more people to get on a bike. The results: folks will feel healthier, experience more streetscape, contribute to a better environment, and save money – on gas as well as the actual mode of transport.

“There are so many advantages to this, that it will be good enough to replace some of your car-based trips, and we’ll see people switching onto this mode,” says Biderman, who has ridden buses in Detroit and remembers it taking forever.

He sees the smart wheel as a solution for low-density cities like Detroit.

Connecting: A Tool for a Cyber-physical City 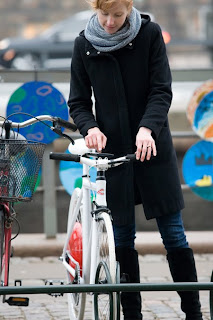 Now for the cool stuff.

The Copenhagen Wheel was designed with a smart phone interface that has the ability to serve as a communication junction between the rider, the city and its environment, and the bike.

When the phone gets put into its handlebar cradle, it unlocks the bike because the phone and the cradle sync via Bluetooth. This may signal the glorious end to hauling cumbersome bike locks.

Cyclists can then use their phone and the Copenhagen Wheel app to control the bike and to collect and share data that’s gathered from the sensors in the wheel.

While the manufacturers who eventually produce the smart wheel will have their hand in what the wheel application will do, here’s what the SENSEable City researchers have in mind:

A “ride” screen that allows the cyclist to control aspects of the bike while riding, like how much motor assist is wanted. It can also alert riders if they are being exposed to serious pollutants and may want to re-route. Also, if a friend has the smart wheel too and is nearby, riders will get a “friend proximity notice.” (Motor City Brewing Works beer stop, anyone?)

An “analyze” screen that helps riders locate their bike, access personal health data, like calories burned, and miles ridden; review environmental data like pollution exposure, noise levels and road conditions; and look at the number of known friends that have crossed paths, thus helping to build a community of cyclists.

A “share” screen that allows riders to share data with their friends, but also with the their city. Sharing data with friends will help cyclists make more informed riding decisions. Collecting and sharing data with cities – if lots of riders did this – could help cities monitor environmental conditions and better understand the impact of transportation on health, quality of life, and city infrastructure.

“Beyond thinking of this as a vehicle, we also want to think about it as collecting data,” says Biderman. “The idea of the bike as platform not only for mobility, but also for communication is central to this project, and it’s another way to attract people to using it.”

And we think it’s a fine idea for Detroit.

Would you buy a bike outfitted with the Copenhagen Wheel? Tell us what you think in the comments below.

Calling all crazies for the Detroit River ...