Home›People›Reallocating Space Away from the Car

Reallocating Space Away from the Car

Editor's Note: This story originally appeared in This Big City, March 15, 2013 and written by Bruce McVean, integrated design manager at Beyond Green and founder of Movement for Liveable London.

Cities need to redefine their relationship with the car – shaping cars and driver behaviour to suit cities, not cities to suit cars. This doesn’t mean banning cars outright, but rather reminding people that when they drive into the city they and their car enter it as guests.

Research by Sustrans and Social Data in 2004 estimated that a car is essential for approximately a third of journeys, such as those that involve moving heavy and bulky loads. The convenience and flexibility that the car can provide means it will always be around in one form or another.

We must, however, begin to address some of the inherent inefficiencies built into a car dominated transport system. Cars take up a lot of space and most of the time they’re occupying that space without even moving. They’re also expensive to own – even before you put any petrol in the tank you have to buy a car and pay Vehicle Excise Duty and insurance.

If a car is only essential for a third of your journeys, why would you need or want to own one? Wouldn’t it be better to use a shared car and in the process have access to a range of vehicles suited to the job in hand? Of course it would, and it’s no surprise that car clubs and pay-as-you-drive schemes are a growth industry.

If the private car’s time is up, the age of the bicycle is just beginning. Bikes, the ultimate form of private urban transport, are space efficient, genuinely zero emissions, healthy, sociable, affordable and fun.

If cities are to realise the potential of the bike as a form of mass transit then they must be welcoming to cyclists of all ages and abilities. Creating the conditions for mass cycling demands reducing traffic speeds and volumes on all streets and building segregated cycle lanes where traffic speeds and/or volumes remain high enough to require them.

Road space in cities is a precious commodity and a highly contested one too, but capacity must to be found to allow the reallocation of road space to bikes and public transport.

Congestion charging in London and elsewhere has been proven to be very effective at reducing traffic volumes. Spare road capacity can then be reallocated to create improved conditions for pedestrians and cyclists and improve the reliability of public transport. 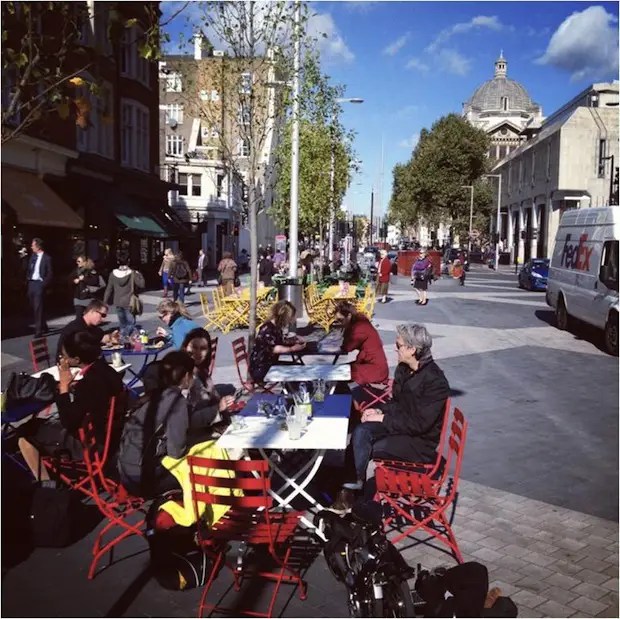 The reallocation of space away from the car will help restore city streets to their proper function as places for people and activity as well as traffic. Streets are complex places, where the conflicting demands of many users must be balanced. On many streets the balance is currently tipped in favour of keeping motor vehicles moving at the expense of other users.

Temporary street closures of all varieties, from the wonderful Playing Out Project in Bristol to Bogota’s much imitated Ciclovia, have an important role to play in helping people imagine a different future; one where the balance is tipped in the other direction, putting the needs of residents, shoppers and workers above the needs of the passing motorist.

Temporary closures can become permanent over time. Each summer for the last ten years Paris has closed a section of the expressway on the banks of the Seine so that it can be turned into an urban beach, the Paris Plage. 2.5km of that expressway is now set to be permanently converted into a pedestrian boulevard.

New York, meanwhile, has been piloting much quicker conversions. Paint, planters and bollards are used to mark out new public spaces and trial potentially controversial schemes that may otherwise never get off the drawing board – sometimes it’s better to seek forgiveness than ask permission.

All of the above ideas and initiatives (and the rest that there hasn’t been space to mention), must be brought together in an integrated sustainable transport strategy. Too often transport policy leaps from project to project, many of them capital intensive big infrastructure projects, without being informed by a coherent vision of how a city’s transport system should serve the city into the future.

Cities must look backwards as well as forwards when setting that vision. It’s easy to fall under the spell of new technology or twiddle our thumbs while we wait for a technological silver bullet like self-driving cars to solve our problems, but much of what is required to establish a sustainable urban transport system and move cities away from car dependency has been around for a long time.

Since the '60s and '70s many cities have been redefining their relationship with the car – particularly in the Netherlands and elsewhere in northern Europe. So a ‘new movement’ has already started, but given the urgent need to address the social, economic and environmental impacts of car dependency it needs to quickly gather momentum. Copenhagen has been in the process of transforming itself for 50 years, it still has some way to go and other cities that are just beginning the process don’t have the luxury of time.

Cities must move as quickly as possible towards achieving the ultimate goal – a liveable city served by a resilient transport network. A network that will help the city respond to the challenges of climate change and peak cheap oil while improving quality of life and reducing inequalities. To paraphrase that great observer of city life William H. Whyte, urban transport systems must help cities assert themselves as good places to live.