DETROIT—Could poor road infrastructure have played a role in the hit-and-run deaths of two homeless Detroiters this past summer? One eyewitness thinks the absence of functional street lighting may have had a part in the fatal collision that killed Michael Alston, 56, and James Van Horn, 66, on July 27. 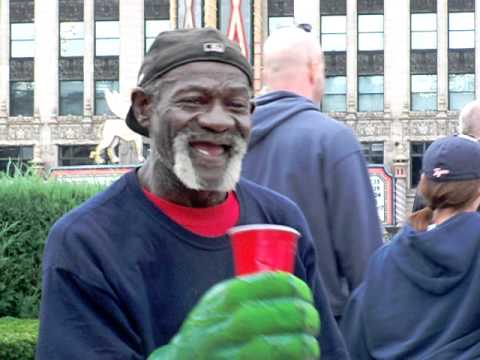 Both men were well known on the streets of Detroit. Van Horn's panhandling antics at Comerica Park, which involved chanting the catchphrase "Eat 'em up Tigers!" while waving around a giant foam hand, made him something of a local celebrity. Alston, who had lost his legs and rode around in a wheelchair, was known around town by the nickname Dreadlock Mike because of his long dreaded hairstyle.

The two men were struck by at least one vehicle, possibly two, at the intersection of Russell and Gratiot near Eastern Market around 2:30 a.m. Saturday, July 27. They both died at the scene of the collision.

Gregory Holm, who owns a nearby restaurant called Frontera, was at the intersection the night of the fatal incident. He believes a lack of proper lighting may have contributed to the tragedy.

"Perhaps it is possible that if we had streetlights the night of that accident an accident may have been [avoided]," he told Mode Shift in an email. "Since the accident we reached out to the city and to Eastern Market and we have since had new working lights installed on the street lamps and the street is completely lit at this time."

However, Holm adds that Alston and Van Horn's themselves contributed to the deadly situation by deciding to walk on the road in area with decent sidewalks and curb cuts.

"Both of the individuals that were killed were in the street at the time of being struck by the car," he said. "And there was access to the sidewalk. It was their choice to ride in the street, and I had seen them doing this many times."

Their reason for sticking to the street may be linked to larger systematic issues regarding city sidewalks. It's not uncommon to see Detroiters walking, riding scooters or rolling wheelchairs in the middle of the road.

Todd Scott, Detroit Greenways Coordinator with the Michigan Trails and Greenways Alliance, offered his thoughts on why pedestrians and others sometimes travel in this manner.

"What I've heard is that people walk in the middle of the street for their own safety, whether it be due to unkempt sidewalks, overgrown shrubs or stray dogs," he told Mode Shift. Scott also cited concerns people may have about getting assaulted or robbed.

Wheelchair users have also expressed their own concerns about using and gaining access to Detroit's sidewalks. Earlier this month, members of the disability rights group Warriors on Wheels held a protest at the intersection of Southfield and Outer Drive to raise awareness about these issues. Several of the activists even blocked traffic to highlight the absence of curb cuts on the freeway overpass walkway.

Issues like these may have made the two men feel more comfortable taking the road over the sidewalks on the night of their deaths. Although it's no longer possible to get a clear sense of their motivations that morning, there's no doubt the pair will be missed.

News of the Van Horn's and Alston's deaths attracted quite a lot of attention on social media sites. A facebook page dedicated to finding those responsible for the two men's deaths garnered more than 18,000 likes; an online fundraising drive for their funerals raised over $5,000.

Detroit Police believe the driver of black Dodge Avenger was responsible for hitting the two men. Not long after the incident, a white Cadillac that may have also been involved was impounded by the department. No one was ever apprehended in connection with the case.

Mode Shift inquired with the Detroit Police on Nov. 19 about the investigation of their deaths, but Officer Beasley-Dorsey with the Department's Office of Public Information said there had been no new developments since the summer.