DETROIT—Detroit’s cycling community may be celebrating new lanes on the city’s East Side right now, but an upcoming development in Midtown promises to up the ante for bicycle-friendly infrastructure even further.

The city’s first buffered bike lanes are scheduled to appear next year on Second Avenue between Temple and Warren. They’re part of a city council-approved project that will also involve converting the road from a one-way to a two-way street.

Buffered bicycle lanes are specially designed to provide more protection to cyclists than conventional lanes. They feature extra buffer room between lanes to encourage motorists to keep their distance from two-wheeled travelers.

Construction for the lanes and street conversion carries an estimated price tag of about  $200,000, a figure that doesn’t include inspection fees. The Michigan Department of Transportation will be overseeing the project, as part of that funding is coming from the federal government’s coffers.

Work is set to begin in spring 2014 and should last just a few months, according to Midtown Detroit Inc. The nonprofit development organzation, which has also been influential in building the nearby Midtown Loop greenway, sponsored the Second Avenue project’s design as part of a reinvestment strategy for the neighborhood.

“Second Avenue[’s] existing paved width is quite large,” Midtown Detroit Inc. Greenway & Non-Motorized Planner Jereen Rice told Mode Shift. “This street was a prime candidate for a ‘road diet.’  Providing a buffer lane was the perfect use of available width.”

The lanes will run a mile along both sides of the street with a diagonally striped buffer between the parking lane and travel lanes. The typical cross section will feature an 8-foot parking area, 5-foot bike lane, 3.5-foot buffer and 11-foot drive lane on each side of an 11-foot center turn lane.

The route on Second will complement existing lanes on Third Street, a former one-way road that has already made the two-way switch. Rice told Mode Shift this sort of road transformation can often come with benefits.

“One-way to two-way street conversions is one initiative to make the community more livable and economically successful,” she said. “This conversion will provide a rebalancing of Midtown roads making this corridor safer and friendlier for all modes of travel.” 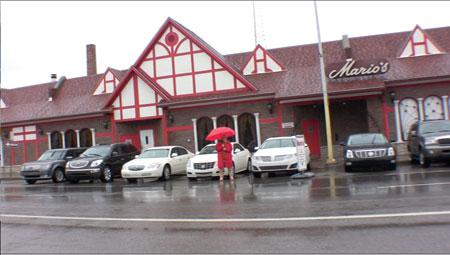 However, not everyone in the area is on board with the changes. Mario’s, a 65-year-old Italian restaurant located on Second, opposes the conversion on the grounds that it will hurt local businesses -- and potentially even people.

Mario’s owner Vincent Passalacqua told Mode Shift in an email that his restaurant shuttles clients to and from other Detroit venues and sporting events, sometimes transporting up to 600 people an hour. He thinks the congestion that comes with a two-way street will be dangerous.

“Our business ingress and egress is based upon one way traffic,” he said. “Some of our customers are older, but still like to dine and dance. We are concerned that they will have to cross the street at night. Will they not be able to play tag with traffic? How about the bikers that are surprised by the patrons opening their doors into their bike?”

What’s more, Passalacqua said that free parking his restaurant now provides to people in the area will be eliminated by the conversion. He also questioned the wisdom tampering with a good thing.

“We have a program that works,” he said. “Does the city? What is the point of endangering businesses and residents?"

Still, there also are local merchants who differ with him on the subject. Harry Nafso, the owner of Grocer Farm Market, believes  extra traffic from the conversion will cut down crime around his party store, located at Second and Peterboro.

Dan Knoche, manager of Fred’s Key Shop and Locksmith, a family-owned business with deep roots in the neighborhood, told Mode Shift that Passalacqua was opposing the conversion because it endangers his restaurant’s lucrative valet parking revenue.

“He don’t like it, because that’s going to downsize his parking,” he said. “That’s why he’s going to fight tooth and nail.”

Knoche himself supports the change. By allowing more people through and making it easier to navigate Second, he thinks the conversion will give a welcome a boost to local businesses like the party store and his key shop. He’s just as enthusiastic about what it means for bicyclists.

“I love the bike lanes,” he said. “You see how many of these young people working downtown are riding back and forth. They live down in the New Center area, and they’re riding their bikes to downtown Detroit. There’s a lot going on with Quicken Loans and Dan Gilbert and everything. They need these bike lanes!”

Do you think improvements such as buffered bike lanes are right for Detroit? If so, come to our event to our event this Thursday.